Last year, Captain Ron Teke and his fishing team, Colorado Magic, requested a sleeve of 50 tags.  Part of their motivation to receive this many tags was that they were determined to become 2019’s top tagging private boat and beat the reigning champions, the Killin’ Time II fishing team, who fish offshore just down the road in the Lower Keys.  Although they fell short of winning the coveted dolphin tagging award, little did they know that their drive to win and consequential uptick in tagging activity would result not only in a milestone recovery for the program but their second and most significant recovery since they began tagging for the Dolphinfish Research Program (DRP) in 2004.  In addition, Captain Teke’s fish, reported by Captain Vickram Dindyal while fishing a FAD northeast of Barbuda on March 4th, 2020, represents the third recovery in the Tropical Atlantic in the last 15 months for the DRP.  Similar to the other recoveries, Captain Teke’s fish grew 30″ in 265 days, which equates to a weekly growth rate of .79″.  These observations show the movement of dolphin biomass from the U.S. East Coast to the Tropical Atlantic/Northeastern Caribbean Sea in 9 to 11 months.  All three recoveries were dolphin that ranged between 16″ and 24″ fork length, were released during summertime off the Keys, grew to tackle testing adult fish, and were recaptured during winter in the Tropical Atlantic.  Collectively, this is the 7th international recovery in the Tropical Atlantic for the DRP.  When this event is compared to a geolocation track obtained from a 42” bull in 2014, it suggests this fish traveled much more than the distance of that track (8,059.10 miles).  We approximate that if this fish followed a path similar to that of the 2014 bull, and one assumes this fish followed the Gulf Stream north from its release site to offshore South Carolina (574 miles), this dolphin traveled at least 8,633 miles in 265 days.

Figure 1 – Dolphin dispersals from Florida and South Carolina to the Tropical Atlantic and Caribbean Sea.  The bold black arrow is the most recent international recovery depicted as a straight-line between mark and recapture sites.  Numbers indicate days at liberty.  The colors of the geolocation track obtained in 2014 indicate the month.  BAR = Barbuda; TA= Tropical Atlantic; CS=Caribbean Sea.

This would, however, put the daily movement rate of this fish at 32.5 miles per day, which is substantially slower than the 2014 bull (44.7 miles/day).  In a scientific paper published in 2014, the combination of both conventional mark and recapture data with surface drifter tracks provided realistic movement route comparisons given dolphin fidelity with drifting objects as well as their shallow diving nature (click here to see that paper and additional web article below).  In that paper, one fish recaptured in the north-central Atlantic (443 miles southwest of the Azores Islands) provided evidence of dolphin along the U.S. East Coast moving at least 2,400 miles into the Atlantic.  When this observation is combined with surface drifter tracks and seven recoveries (Cuba, Hispaniola, Mona Passage, Puerto Rico, USVIs, Anguilla, and Barbuda) in the Tropical Atlantic, all observations point to fall/winter migration from the U.S. East Coast to the Tropical Atlantic with increasing days at liberty for recovered fish as you move east along the Greater Antilles from the Cuba event (see figures; 159 DAL) to the recent northern Leeward Islands event recently off Barbuda (265 DAL).  In the future, additional geolocation tracks from dolphin tagged and released off Florida, South Carolina, or Rhode Island can provide routes dolphin take that can be compared to the patterns observed in conventional recoveries as well as surface drifter tracks.  Congratulations to Captain Ron Teke and the Colorado Magic fishing team as well as Captain Vickram Dindyal for logging yet another fascinating recovery for the DRP.

Figure 2 – Examples of dolphin dispersals from Florida to the Tropical Atlantic in December (Dec) 2018 and March (Mar) 2019.  The bold black arrows are the most recent international recoveries depicted as a straight-line between mark and recapture sites.  Numbers indicate days at liberty.  The colors of the geolocation track obtained in 2014 indicate the month.  TA= Tropical Atlantic; CS=Caribbean Sea.

Another Dolphin Goes the Distance (Again!)

Another Dolphin Goes the Distance (Again!) Last month we reported on a major recovery that occurred north of Arecibo, Puerto Rico, in December.  You can read a detailed article about that recovery by clicking here.  This month we are excited to report that Danielle and Daryl Gustafson of Big Pine Key, FL, added another major recovery for the DRP, but this time it was north of St. Thomas, USVI.  The fish was recaptured by Eric Estrada during a charter run by Captain Colin Butler, owner of Fish Whistle Sport Fishing Charters.  This is the first international recapture from Florida to the north coast of the USVIs for the DRP and the second recovery in the northern portion of the U.S. Caribbean in the past three months for the DRP.  Is this a pattern?  Two recoveries do not point to a pattern but the recoveries are intriguing for a couple of reasons.  First, the most obvious observation is that both fish were tagged off the Florida Keys in nearly the same location (only 20 miles between release locations) and recaptured north of the continental shelf break that separates the USVIs and Puerto Rico from the Caribbean Sea.  Secondly, these recoveries are the first for the DRP since the program began in 2002 that moved from the Keys to this area.  In the case of the most recent recovery, the fish was at liberty for 210 days and grew 14″ or at least .46″ per week before being recovered.  While the time at large is similar to the December recovery (a difference of 12 days), the growth rate of the fish involved in the most recent recovery is substantially slower.  In the case of the December recovery, the fish weighed 27 pounds when recovered.  Looking at thousands of length-at-weight records, a dolphin that weighs 27 pounds is estimated to range between 44” to 47” depending on the gender (which was unknown in the December recovery).  Therefore, we estimate the growth of the fish recovered in December to range between .70” to .98” per week, or 35% to 54% faster than the most recent recovery.  The biggest caveat with this comparison is the fact that the December growth rate was estimated based off measurements that were estimated.  However, even when we compare the growth rate of the fish involved in the most recent recovery to only those recaptures that have occurred throughout the history of the program where sizes were measured upon release and recapture, the growth rate is still substantially slower for this fish.  Could this have been a pompono dolphin which are known to be smaller than their common dolphin cousins?  The Gustafsons did not note that this was a pompono upon release (and they tagged 9 other individuals on that particular day), and when recaptured, Captain Colin Butler did not notice anything peculiar about the fish but did note that it was a male (it was noted a male upon release, too).  Male pompono also develop a blunt forehead but it is not as pronounced as the common dolphin.  Because of this observation, we lean more toward this recovery being a common dolphin, but because a photograph was not taken of the fish before it was re-released with the tag, we are not 100% certain.  Take home message: please take photos of fish that are recaptured 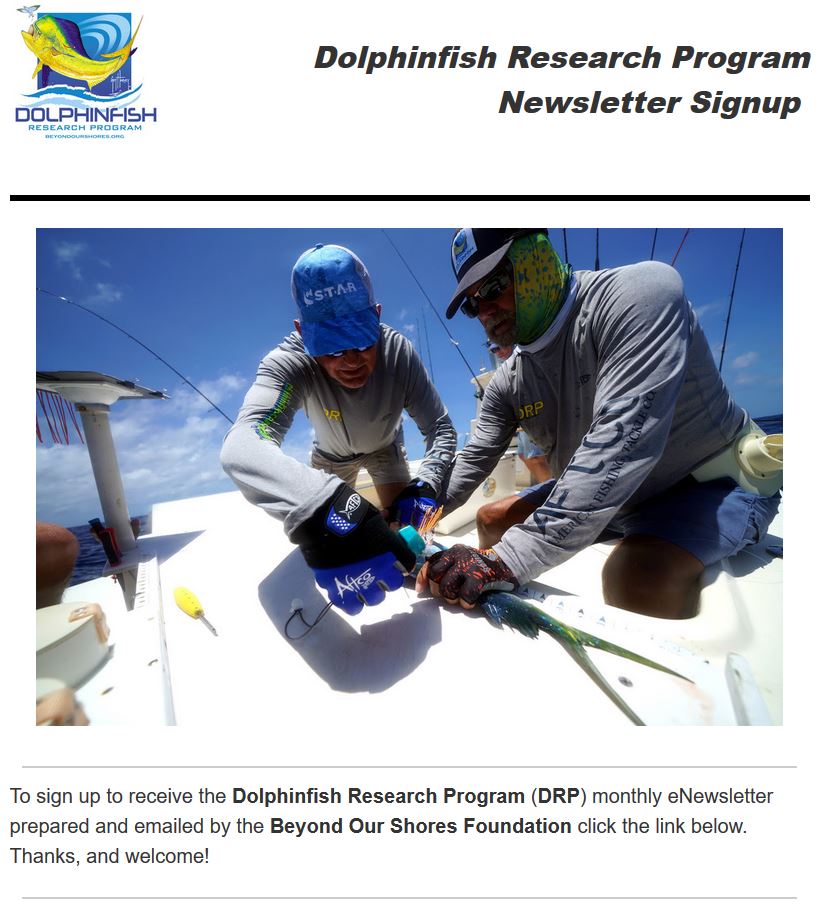